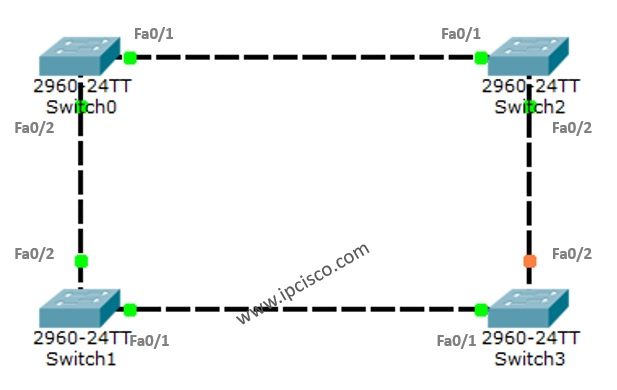 In this post, instead of detaily talk about STP (Spanning Tree Protocol), we will focus on a basic Switching Loop topology and how STP mechanism helps to avoid this Switching Loop.

You can DOWNLOAD the Packet Tracer example with .pkt format HERE.

Switching Loop is an unwanted problem in a network. Then, what is Switching Loop? Switching Loop is the situation, in which there are two layer 2 path between two layer 2 endpoint(switch, brigde). Switches creates broadcast storms from every port and switch rebroadcast again and again. Because of teh fact that there is no TTL(time to live) mechanism on layer 2, this continues forever.

To avoid this unwanted Switching Loops, there are some mechanisms. One of the most common name of this mechanisms is STP(Spanning Tree Protocol).

Acording to this protocol, in the switching topology, a Root Bridge is selected. And then the connected port of the switches are classified. The port classification and their meaning are like below:

For STP example with PAcket Tracer, we will use the below switch topology. 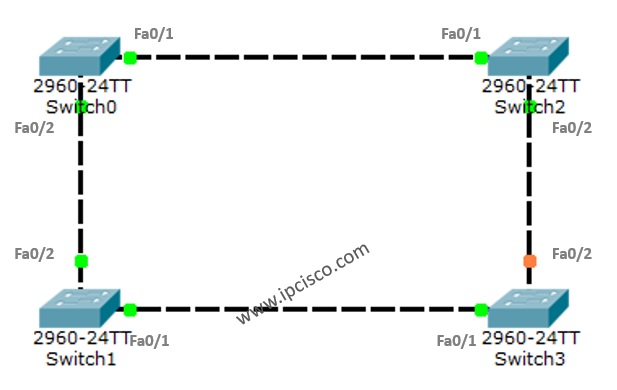 STP Example Topology
As you can see after connecting the switches together in the Loop position, one of the ports become blocking. Because by default STP is enabled and it is avoiding us any Switching Loop.

Both of these ports are in Forwarding State, this means that they are ready to send the traffic. As a recall, as you know there are four states of an STP port. These are:

You can also use the following commands to check the spanning-tree information.

You can check the other Packet Tracer Examples below: