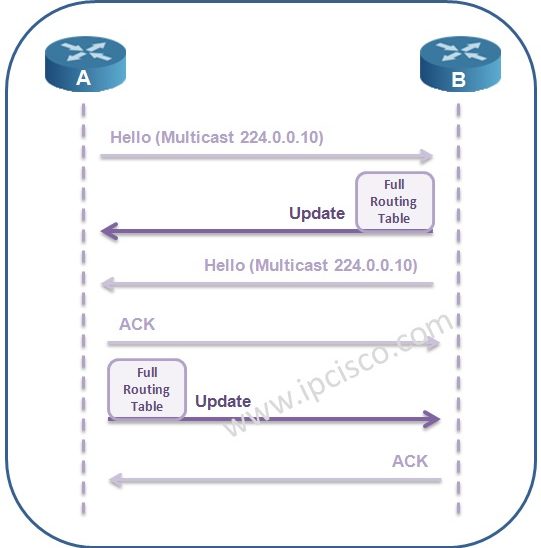 EIGRP Protocol is one of the most used Dynamic Routing Protocol as IGP (Interior Gateway Protocol). Especially it is used for Routing purpose inside the networks that is mostly consist of Cisco devices.

You can test your Routing Knowledge on CCNP ENCOR Practice Tests Page!

EIGRP uses DUAL (Diffusing Update Algorithm) for routing calculations. Periodic Updates are not used but if a change occurs in the network like up/down links, update messages are sent.

The most important characteristic of this routing protocol is that, it is a Fast Converged Routing Protocol. Enhanced Interior Gateway Routing Protocol keeps the “Backup Routes” beside the “Best Route” to a destination in the Topology table. So, during a failure, it does not need to calculate a new route. Instead, it uses the Backup Route towards the destination.

EIGRP uses different types of messages to build neighbourship, to keep the connection and for the updates. These main messages are :

Hello Packets are used to establish and maintain EIGRP Neighbourship.

Query Packets are used to ask for any routing update, requests an update.

Reply Packets are used as a response to the Query Packets.

We will learn these EIGRP Packets detailly in next lessons.

Enhanced Interior Gateway Routing Protocol has three tables. These tables are used on Routing Operation. The EIGRP Tables are given below:

Neighbor Table is the table that keeps All EIGRP Neighbour Routers.

Routing Table is the table that keeps the Best Routes to any destinations.

As you can see, there are some K values in EGRP metric formule. By default these values are:

These K values need to be match in both ends to form an EIGRP Neighbourship. You can change these values but it is not recommended.

By default Bandwith and Delay values become important only and used as a metric (The other parts will be 0, becaue of multiplying with 0). So, we can say that, Enhanced Interior Gateway Routing Protocol uses the path with minimum bandwidth and the total delay to a destination.

The default Formula becomes like below (with default K values ) :

You can test your Routing Knowledge on CCNP ENCOR Practice Tests Page!

Enhanced Interior Gateway Routing Protocol works with IPv4, IPv6, IPX and AppleTalk Routed Protocols. So with this characteristic, we can say that EIGRP is a Protocol Independent Routing Protocol.

The Administrative Distance (Preference) values for EIGRP are given below:

If there are routes to a destination with Enhanced Interior Gateway Routing Protocol, RIP and OSPF, EIGRP (Internal) Routes are prefered over RIP and OSPF Routes. Because the administartive distance of RIP is 120 and OSPF Administrative Distance is 110.

You can find Administrative Distance (Preference) Table for Cisco, Juniper, Nokia and Huawei, on IPCisco.com.