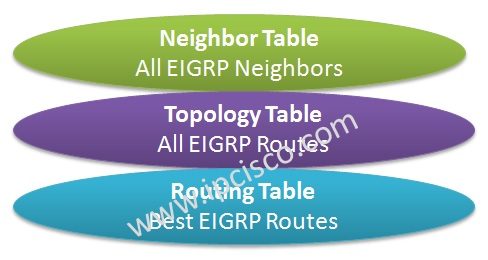 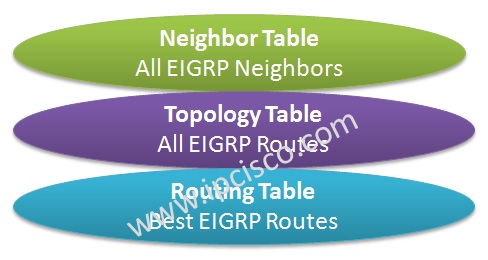 Now, let’s explain each of these tables and thier roles in EIGRP Operation.

EIGRP (Enhanced Interior Gateway Routing Protocol) has a specific Neighbour Table for each Layer 3 protocols. For example, if you are using both IPv4 and IPv6 protocols, you will have two different EIGRP Neighbour Tables.

You can see the EIGRP Neighbour Table with “show ip eigrp neighbors ” command.

You can see an output of “show ip eigrp neighbors ” command is given below:

EIGRP Topology Table keeps all the routes to all the destinations. It keeps all the Successor and Feasible Successor routes. We can say also, “it keeps the best routes and the alternatives”.

An example output of “show ip eigrp topology” command is given below:

In EIGRP Topology Table, there are some route states. These Route states are given below:

Stuck In Active (SIA) : The mode when no reply is get in 3 minutes. The cause of Stuck In Active can be any high CPU and memory usage, packet drops, unidirectional links etc.

EIGRP Routing Table is the table which keeps the Best Routes to any destinations. This Best Routes are Successors.

You can see the EIGRP Routing Table with “show ip route eigrp” command.

An example output of “show ip route eigrp” command is given below:

These tables are filled with Update Messages. In EIGRP, updates are not periodic. Whenever a change occurs in the EIGRP network, triggered updates are sent about that change.

EIGRP (Enhanced Interior Gateway Routing Protocol) is a reliable protocol. It has window size one. If there is no acknowledgement that the packet is received, then the next one is not sent. Even if any packet is not acknowledged this packet is retransmited at EIGRP. After 16 unacknowledged retransmission if still there is no Ack, then EIGRP resets neighborship.

In the EIGRP Configuration Lesson, you can check these tables detailly.

In EIGRP Protocol, there are some new terms that explains different routes to a destination according to their metrics. These terms are :

Let’s check these EIGRP specific terms one by one.

What is Feasible Distance and Advertised Distance?

Feasible Distance (FD) : The cost of the route to the next hop, plus, next hop to the destination.

Advertised Distance (AD) : The cost of the route from the next hop to the destination.

Think about the basic topology above. From Router A and Router B to the destination router, let’s check the Feasible Distance and Advertised Distance values.

What is Successor and Feasible Successor?