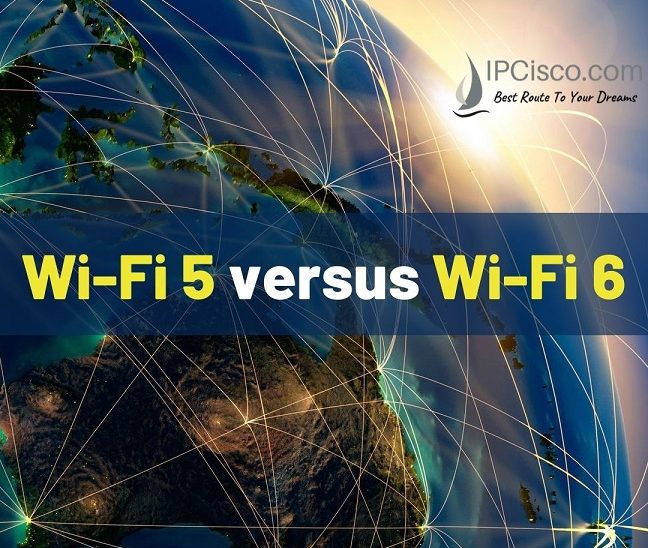 Wireless technology is evolving every day. From the beginning of wifi technology, a new standard has developed and release almost every 5 years. And lastly while we were using Wi-Fi 5, a new standard, Wi-Fi 6 has developed. Then, lastly an enhancement came to this standard named Wi-Fi 6E. And now, we are waiting Wi-Fi 7. Throughout this way, we will talk about the differences of Wi-Fi 6 and Wi-Fi 5. We will learn Wifi 6 vs Wifi 5.

Before focusing to the differences of these latest wireless standards, let’s remember the whole Wi-Fi standards and the development dates:

These standard naming and the short forms are created by WiFi Alliance.

The Differences of Wi-Fi 5 and Wi-Fi 6

Now, let’s focus on our main lesson and make the comparison for Wifi 6 vs Wifi 5. 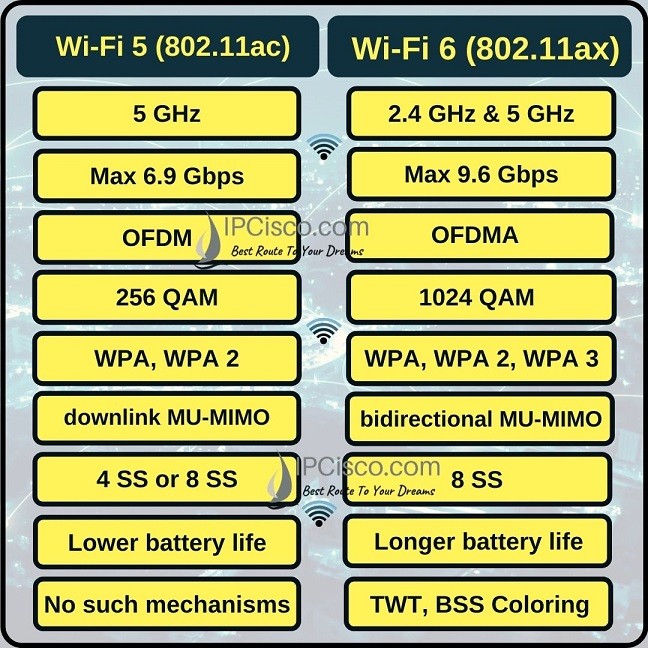 The second difference is related with the wifi bands used in the standard. Wi-Fi 5 is using 5 GHz band only while Wi-Fi 6 is using 2.4 GHz and 5 GHz bands of wireless spectrum. With the enhancement of Wi-Fi 6, Wi-Fi 6E, there will be also an additional frequency band. This will be 6 GHz band.

With the development of new standards in wi-fi technology, the first thing that is important for users is data transfer speed. If we compare Wifi 6 vs Wifi 5, as a new technology, Wifi 6 has higher speeds than Wifi 5. The maximum data rate for wifi 5 is 6.9 Gbps. It is 9.6 Gbps for wifi 6. These are all theorical speeds. But even in real life the speeds are lower, wifi 6 provide more speeds.

Getting Closer to Wired Network

In wired networks, data speeds are higher than wireless networks till now. But with the development of wireless world and especially with WiFi 6, the data rates of wifi networks is increasing and getting closer to wired network data rates.

In the following years, there will be more gaming, AR/VR, video, live video streaming traffic. All these traffic types need more data rates day by day. With wifi 6, the data speeds are increasing and shortly, the data rates will catch the wired network data rates. This will cause more wireless network users in the future. People will prefer using wireless networks instead of wired networks both at home and in companies.

Battery life of the devices is getting more important with the development of technology. Because, new features are coming with new techs and these technologies spend more battery of the devices. To overcome this, with the new wifi standards, battery lifes are also upgraded.

With Wi-Fi 6, there is a new feature called Target Wake Time (TWT). With this feature, the access point which can talk with the wifi client device can warn the device to sleep its wifi radio when it is not in transmission. So, with this feature the most battery consuming activity is limited. This provides better battery life to end devices.

OFDMA instead of OFDM

With OFDMA, each device does not have to wait of its time. Instead, multiple devices can transmit at the same time.

Security is very important in networks. This is also true for wireless networks, wi-fi. To provide this security, there are different wireless security protocols are used. Wifi 5 supports WPA and WPA 2 protocols to secure the wireless connection. Wifi 6 adds also WPA 3 to these protocols and support WPA, WPA 2 and WPA 3 together.

Beamforming is one of the other important properties of wifi 6. It is not a new feature but a developed feature for better performance in this new wifi technology. Beamforming is a feature with which the router detects the receiver and send the data through only this device instead of sending the data everywhere.

BSS Coloring is a new feature of Wi-Fi 6. It is not used in Wi-Fi 5. According to this BSS coloring feature, BSSs are identified if there is also another radio on the same channel. In other words, with this method, the radios coming from the overlapping BSS can prevented.

This is an important feature especially for crowded places. With BSS Coloring and OFDMA, connection in a crowded place can be more efficient.

In standard AC routers, only one device can transmit at a time. But with MU-MIMO (Multi-user, multiple-input, multiple-output), multiple devices can communicate with the router at a time. Antennas are the other important thing to compare Wifi 6 vs Wifi 5.

In Wi-Fi 5, 4 x 4 MU-MIMO (Multi-user, multiple-input, multiple-output) are used. This means that it has 4 spatial streams and it can communicate with maximum four devices at a time. This can be increased up yo 8 spatial streams in wifi 5.

But with Wi-Fi 6, 8 x 8 MU-MIMO are used. This means that it has 8 spatial streams and it can communicate with maximum eight devices at a time. This is especially important feature for the crowded areas.

By the way, Wifi 5 support MU-MIMO in downlink while wifi 6 support bidirectional MU-MIMO.