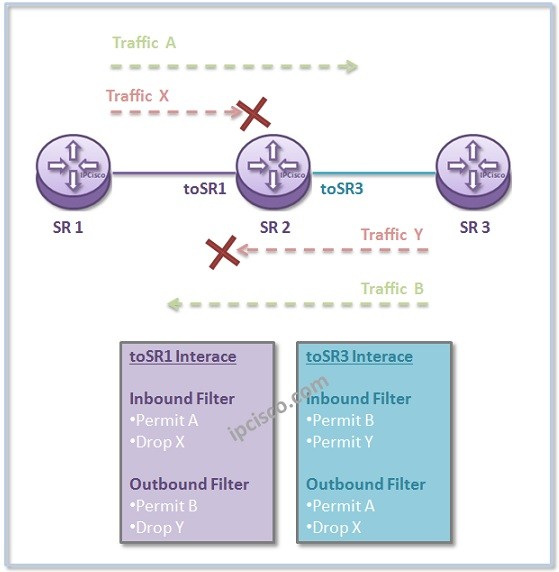 IP Filters, are the rules that force the router to permit or to deny mentioned IP addresses, ports, protocols etc. from a source to a destinatio in Nokia (Formerly Alcatel-Lucent) world. IP Filters is known as Access-List (ACLs). But while working with Alcatel-Lucent devices, generally IP Filter definition is used.

Think about the below IP Filter summary. As you can see below, SR2 has two interfaces and each interface has its own inbound and outbound filters.

By default SAPs do not restrict any traffic. But if you associate an IP Filter, then it allows the permitted traffic and restricts the remainnigs. To do this, in an IP Filter, rules are created. In this rules, there is a match case and an action case. If a match case match with a traffic, then the action case is done. According to these rules, traffic is dropped or forwarded to the destination.

In an IP Filter, firstly the top rule is checked. If it is match, the action is done. If not, then second rule is chekced. If none of the rules match, then the traffic is dropped.

You can also download all Nokia Labs, on Nokia Configuration Labs Page.