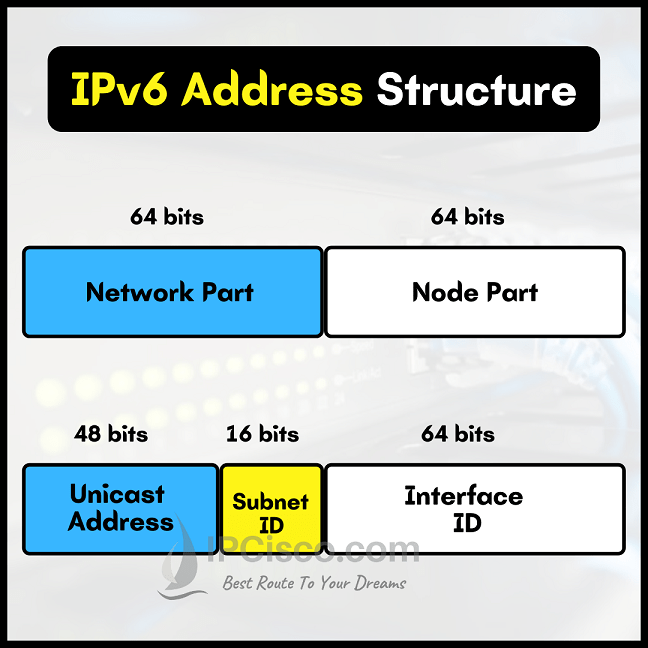 What is an IPv6 Address?

So,  what about IPv5 after IPv4? IPv5 has named as Internet Stream Protocol (ST) that has never become an official standard protocol. It is mainly developed for streaming video and voice as experimental protocol for research and development. It was providing effective data transfer on specific frequencies. It was the foundation of Voice Over IP (VoIP).

Like IPv4, IPv6 has also different IPv6 Address Types. We will talk about these address types one by one in the following IPv6 lessons detailly. Here, we will focus to the basics of this lesson. After this lesson you can also learn IPv6 Subnetting. You can also check wiki definion of IPv6.

IPv4 is widespread implementation of IP protocol. It has 32 bit adress space, so it allow to use almost 232=4,294,967,296 addresses in internet. Because of the fact that these addresses has run out, a new version of IP has revealed. With this new IP version, more addresses are available. The number of these new version of ip addresses are especially mentioned as almost unlimited.

Before IPv4 addresses run out, some techniques like CIDR, NAT, Priviate Addresses are used to alleviate this shortage. But with the development of information technology, more devices has joined to the internet and they are still joining.

With the development of this new internet protocol, some new features has also created.  These are the new features that IPv6 Brings. These new benefits that comes with IPv6 are given below:

IPv6 address consists of 8 groups (separated with colons) and in each colons, there are 4 digits. Each digit can be creatd with 4 bits. So, with these numbers, the address become 8 x 4 x 4 bit = 128 bits. 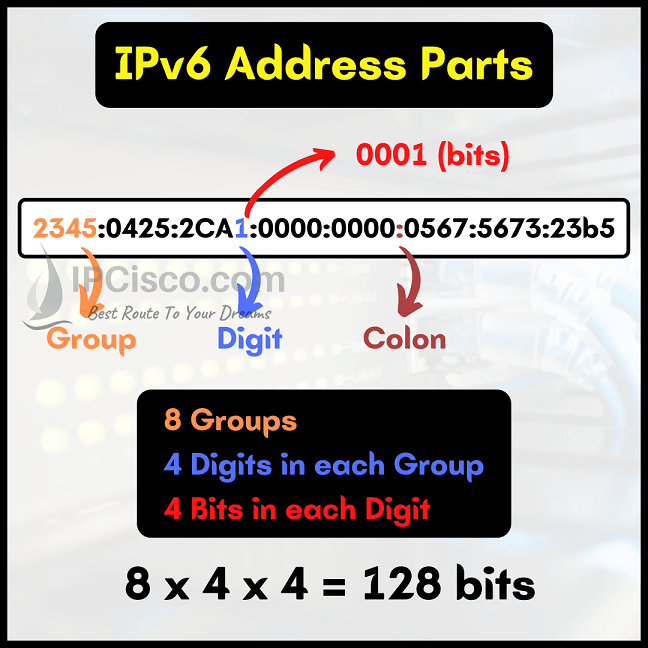 To understand the structure of an IPv6 address, let’s give an example:

As you can see above, our IPv6 address has 8 groups and each group is seperated by colons. In each group, there are 4 digits. Each of these digits can be created with 4 bits. Total there are 128 bits address.

IPv6 addresses are very logn addresses, so sometimes we need to shorten these addresses. To do this we use specific abbreviatioins in IPv6 World. In other words, there are some abbreviations that are used with IPv6 address. These abbreviations are mentioned below with related IPv6 examples

Leading Zeros Can Be Dropped

In an IPv6, a group can consist of all zeros. In such a case, we do not need to write, all the zeros in the address. Instead of it, we can write one zero that means four zeros in the group.

Below, you can find an example of this IPv6 usage.

There can be many zeros in many groups of an IPv6 address. To write all these zeros are very difficult for an IP address consist of 128 bits. To overcome this, IPv6 has a “double colon” shorten mechanims. We can use double colon to shorten continuous zeros in an address. In other words, if we have an entire field of zeros in ana address, we can use only one 0 for each colon. Here, the important point is this: We can use double colon only once in an ipv6 address.

Below, you can find an example of double colon usage with IPv6 address.

IPv6 addresses are consist of two different parts. These parts are given below:

Beside this, we also divide network part into two. These parts are Unicast Address and Subnet ID. So, we can say that, ipv6 address consist of mainly in three parts:

IPv6 Address always use CIDR (Classless Inter Domain Routing) to determine the IPv6 Prefix. It is also used with IPv4 addresses with slash (/) and the network bits. Here, we also use this mechanism.

You can find an example of an Ipv6 Prefix with CIDR value below:

To sum up Interface ID Creation with EUI-64 Format, assume that we have a MAC address of 11-11-22-22-33-33. Follow the steps in the below steps to produce an IPv6 Interface ID from this MAC address: 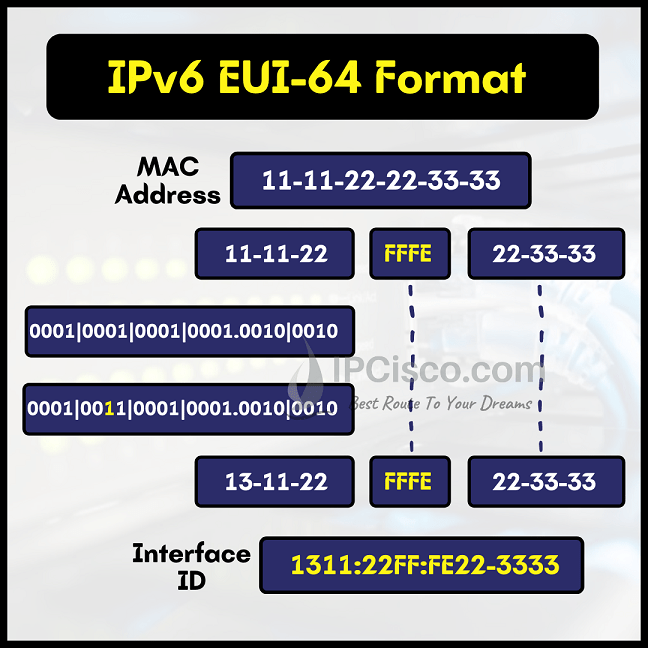 This EUI-65 Format is used for IPv6 Link Local Address Auto Address Configuration. There are various IPv6 Address Types. We will talk about these IPv6 Types and other IPv6 Examples in another lesson detailly. If you would like to learn IPv6 details, you can follow the other lessons.