Below, a logical picture is given for VPWS Service and shows this structure better.

VPWS (Virtual Private Wire Service) is also called as Virtual Leased Line. It provides Point-to-Point VPN Service and from the Customer point of  view, it is like a Leased Line. With VPWS two sites of customer are like directly connected as Point-to-Point.

Customer view of VPWS
As you can see, Virtual Private Wire Service is like a private line that connects customer’s different branches.

Above, we said that VPWS is a Layer 2 VPN Service. But sometimes Virtual Private Wire Service can be defined as Layer 1 VPN Service. Because there is no MAC learning in this service.

Virtual Private Wire Service offers service for Ethernet, ATM, Frame-Relay and TDM across a common IP/MPLS network. According to used L2 technology, there are five types of Nokia VPWS Services. These are :

Ipipe : Ipipe is Interworking Virtual Private Wire Service. It is a simple Point-to-Point L2 VPN Service between two nodes that has different technologies.

Epipe (Ethernet Pipe) is the VPWS VPN Service of Nokia that is for Ethernet Services. In other words, Epipe is a simple Point-to-Point L2 VPN Ethernet Service between two Ethernet SAPs. Epipe Service is also called “Virtual Leased Line (VLL)”.

By the way, for Epipe Service, there is no need for MAC Learning.

Fpipe is the VPWS VPN Service of Nokia for Frame-Relay. It is a simple Point-to-Point L2 VPN Frame-Relay Service between two Frame-Relay SAPs. Here, Frame-Relay PVCs are used between routers.

Apipe (ATM Pipe) is the VPWS VPN Service of Nokia for ATM. It is a simple Point-to-Point L2 VPN ATM Service between two ATM SAPs. Here, ATM PVCs are used between routers.

Cpipe is the VPWS VPN Service of Nokia for TDM. It is a simple Point-to-Point L2 VPN TDM Service between two TDM SAPs. Cpipe is like a TDM Leased Line.

As we have discussed before, in VPN Service terminology there are SAPs (Service Access Points) and SDPs (Service Distribution Points). In VPWS, these terms are also used.

Again, on the Service Router, there are other logical definions, SDPs (Service Distribution Points). Here, SDP is used as the tunnel of the VPN Service. There can be many SDPs and each SDP can have one more VPN Service.

Basically, these two terms show the two sides of the Service Router.

VPWS is a Layer 2 VPN Service so it works as other MPLS VPN Services. AS we have discussed before, two label mechanism is used in this VPN Service. So how VPLS Works? Let’s explain this process in five steps:

Null Encapsulation means that this interface can be used for “Single Service” for “Single Customer”.

Q-in-Q Encapsulation means that this interface can be used to expand VLAN space by tagging tagged packets.

There are also other encapsulation types for SONET. These are :

In the following parts, we will focus on VPWS Configurations on Nokia Service Routers. 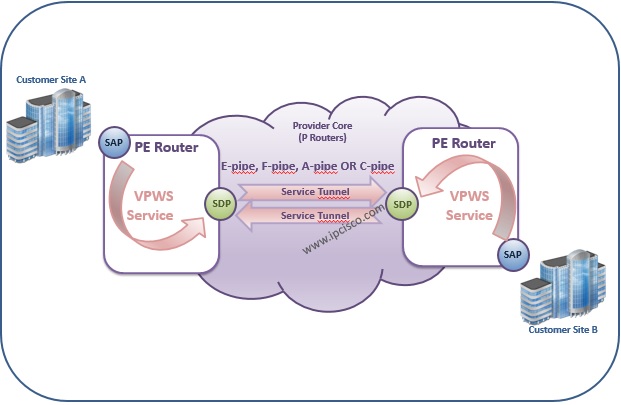