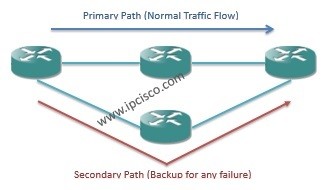 Traffic goes on Primary LSP-Path normally. And there is no load balacancing with Secondary Paths.

Whenever a failure occurs on the Primary LSP-Path, RSVP error is send to the LSP-path’s start point, to the Head-End. And the Secondary LSP-Path, which is standby (ready), is take over the traffic.

There are two types Secondary LSP-Paths. These are:

The Standby Secondary Paths are signalled before the failure. So after failure, it is ready to use. There is no need for signalling.

It is not operational before the failure. After the failure, Head-End receive the Path Error message, and start thesignalling of Non-Standby Secondary Path. This is bad for recovery time, it is late. But it is less resource intensive, less RSVP session end labels consume.

You can check the Standby Secondary Path configuration on Nokia Service Routers below:

Now let’s check the Non-Standby Secondary Path configuration:
(As you can see, there is onlymissing stanby command)