In local protection the aim is not using another path after one path fails. Here, the aim is guiding the traffic to a different way excluding the failure point only. In other words, this is a temporary solution before the exact traffic route. Fast Reroute (FRR) keeps the traffic until a new LSP is given to that traffic by Head-End. It is not aim to keep traffic until the primary comes back.

As we say above, the protection is as close to the point of failure as possible for Fast Reroute (FRR). And the failover time is less than 50ms.

We can clasify the local protection mechanisms. If we clasify it by resource that is protected, there are two types:

We will talk about this protection types in the following article.

With Fast Reroute (FRR), multiple Primary LSP-paths can be protected as long as they have shared paths. This methods clasified according to the number of LSPs protected. Local Protection (Fast Reroute) includes two methods. These methods are:

Implementations has their own advantages, so both One-to-One Backup and Facility Backup is used with these names usually.

The possible configuration options are:

Some of the routers has a special name according to the point they are located for MPLS Fast Reroute. These special routers are:

There are two important points in MPLS protection and restoration mentioned above. These points are the Point of Local Repair (PLR) and Merge Point (MP). Here, the PLR is the node, which notices the failure. And after this it is the point, that the traffic forwarding begins to an alternate path. PLR is also the router, that informs the ingress router (Head-End) about the main LSP problem by PATH Error Messages. After bypass or detour the failure, the traffic need to connect the main link again. And the point that the traffic connect to the main path again, is the MP.

There is also a Detour Merge Point (DMP). This is the point where multiple detours join together along the protected path. If they protect the same LSP and if the exerss point is same, then multiple detours can merge. Detour Merging is enabled by default on Alcatel-Lucent 7750 Service Routers and there is no option to disable it.

PLR and MP,MPLS Recovery
Except Tail-End every router tries to establish Fast Reroute (FRR) tunnel on itself and tries to be PLR.

For Fast Reroute (FRR), the Head-End must know the exact path of the LSP-path before signalling. This can be accomplished in several ways: 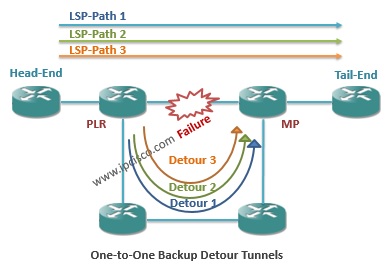 If a failure occurs in the LSP that is protected by One-to-One Backup, the labels are swapped and sent into the alternate path.