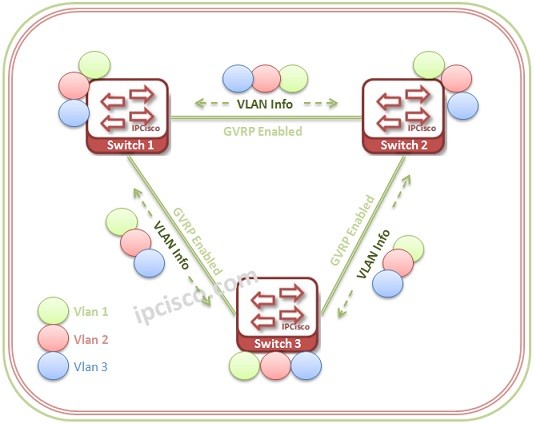 GVRP(GARP VLAN Registration Protocol) is a protocol that is used to control VLANs, dynamic VLAN registration and VLAN prunning in a network. GVRP does this dynamically VLAN management with exchanging VLAN information and prunning unnecessary broadcast and unicast traffic over 802.aQ trunk links. With GVRP, different vendor’s switches can exchange VLAN information eachother.

GVRP is the standard based equivalent of Cisco VTP (VLAN Trunking Protocol). You do not need to configure all the switches in a network with the same VLAN information. With GVRP (like VTP), you can configure the VLAN information in one switch and then this information is propagated to the other swicthes in the network. The above shape summarize this mechanism very good.

GARP that is used by GVRP, has different Messages like Attribute Join Messages and Attribute Leave Messages. This Messages contain multiple Attributes such as Type, Event, Value. The operation of GVRP is done through these GARP Messages. For example if a device that reside in the network sends a VLAN ID from a Port in a GARP Message, the other end will record this information, the VLAN and the Port information.

GARP PDU states in an Ethernet Packet. It is a Layer 2 PDU. GARP PDU includes some parts consist of:

There are multiple Messages in a GARP PDU. These Messages has some sub parts. These are: 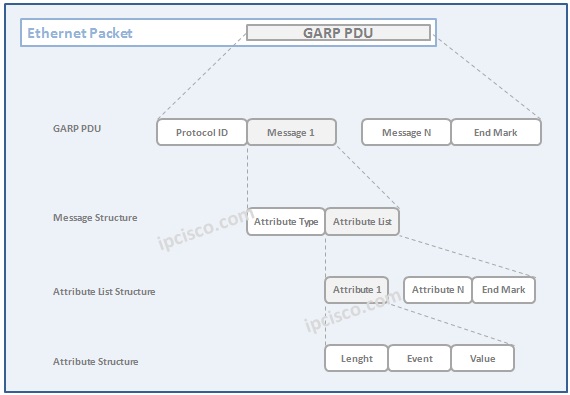