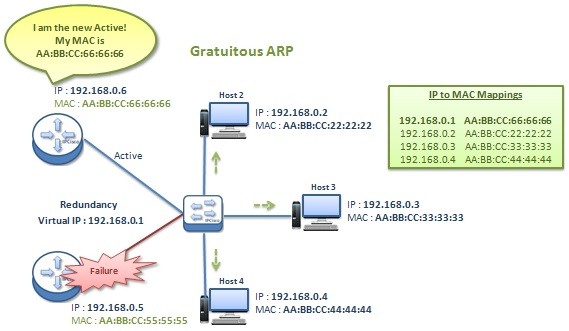 Gratuitous ARP, is the ARP that is used to update the network about IP to MAC Mappings after a change. In other words, it is the way for a node to update other devices about its IP-MAC mappings. There is only Gratuitous ARP Reply that do not need any request to be sent. This message is sent as Broadcast message to all the nodes in the network. And the usage of Gratuitous ARP is a little diffeerent than ARP (Address Resolution Protocol) and Proxy ARP.

There are different scenarios that Gratuitous ARP is used. These scenarios are:

After a manual MAC address change, Gratuitous ARP is used to inform the other network nodes about the new MAC address of the device. Here the G ARP Reply message is sent as broadcast to all the nodes. According to this information, IP to MAC mapping is updated. 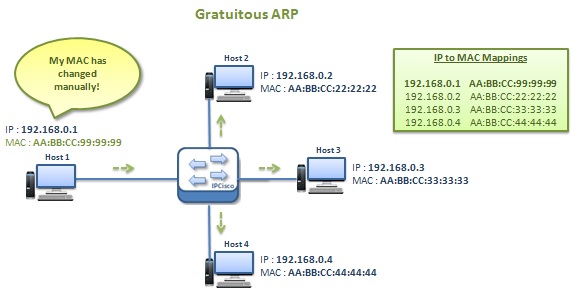 G ARP is also used to inform the network as an assistant to network redundancy mechanims. There can be multiple devices that uses same IP address or both same IP and MAC addresses. After one of the devices in the redundancy mechanims fails, with the help of Gratuitous ARP, network nodes are informed about the new device’s situation.

We can give an example to the first situation like below. As you can see below, there is a shared IP for a redundant network. The IP to MAC mapping is like below at the beginning of this network that uses this redundancy mechanism. Only the MAC address of the Active router’s interface is mapped with virtual shared IP and it is recorded in IP-MAC mapping table.

Whenever a failure occurs in the devices that is used for redundancy, the new active device’s MAC address must be told to the other nodes in the network. This is done via Gratuitous ARP message that is sent to all the nodes in the network as broadcast. Accourding to this information, IP to MAC Mappings are updated. Here, the new active router’s interface MAC will be mapped with the virtual shared IP.