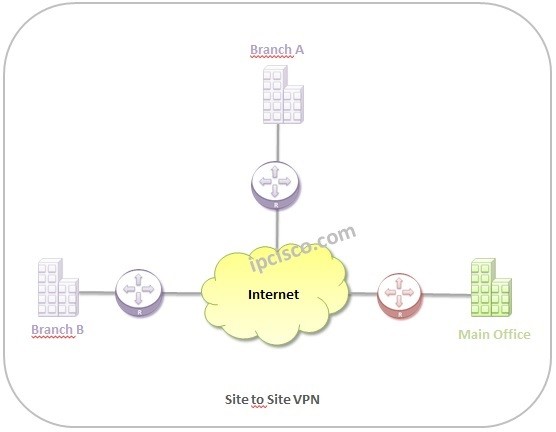 VPN (Virtual Private Network) is a technology that provides a secure connection to a private network  over Internet for users. By encrypting the connections, VPN provides security in this type communication. Basically this security is provided over a VPN Tunnel and provide a trusted connection by avoiding any hacker attacks. Different VPN types and Protocols of VPN provide various secured connections.

There are two main VPN Types. These VPN Types are:

In this lesson, we will learn the types of VPN detailly. Let’s start.

This type of VPN, provides network access chance to remote users, travelling employees, any workers far away from its company. Remote Access VPN is usually used in corporate networks. With Remote Access VPN, users can use their enterprise network’s resources as they are connected directly to their network.

Beside corporate usage, this type of VPN is also used in Home networks. Any users in the home, can use Remote Access VPN to connect internet. By doing this, home users can avoid any regional restrictions like website blocking etc. Beside, home users use it also for a better security during their internet connection.

Site to Site VPN is the VPN type that is used between different locations of companies. With this VPN type company sites which are in geographically different places  are connected over internet securily.

There are two diferent sub Site to Site VPN types. These are:

In Intranet Based VPN,  the branches of a company is connected over internet as they are in the same network. In this style, there is only one company, its branches and there is no eternal connection.

In Extranet Based VPN,  different companies  are connected over internet. As the name of the VPN implies, here, each company is connected to an external company.

One of the most important Protocols of VPN is IPSec. IPSec is a VPN Protocol that provides secure connection over IP networks. With this VPN protocol authentication and encryption are used.

IPSec is a little difficult to build and it is also expensive solution if you compare with other VPN solutions.

In IPSec Lesson, you can learn this protocol detailly.

Layer 2 Tunneling Protocol (L2TP) is another VPN protocol that is widely used in network World. At the beginning it has many vulnerabilities but after a while it is used with IPSec. IPSec  provides extra security to L2TP.  Here, the tunnel creation is done by L2TP and the encryptions is done by IPSec.

SSTP (Secure Socket Tunneling Protocol) is a VPN solution that came with Windows build in solution for VPN. It is similar to Open VPN but instead of an open solution, it is used on mainly Windows. So, it is not a widely prefered VPN protocol.

Because of the fact that it has developed for Windows, now, it is not used on Linux widely and can not used on Macs.

The security of SSTP (Secure Socket Tunneling Protocol) is like Open VPN but fort his, you shoould trus Windows a little.

Internet Key Exchange version 2 (IKEv2), was developed by Cisco and Microsoft. In real, it is not a VPN protocol. It is used especially for mobile device connections.

IKEv2 is a fast and secure protocol. It uses various encryption mechanims like AES, IPSec etc.

BECOME A MEMBER
Back to: CCNP Enterprise 350-401 ENCOR > VPN Technologies