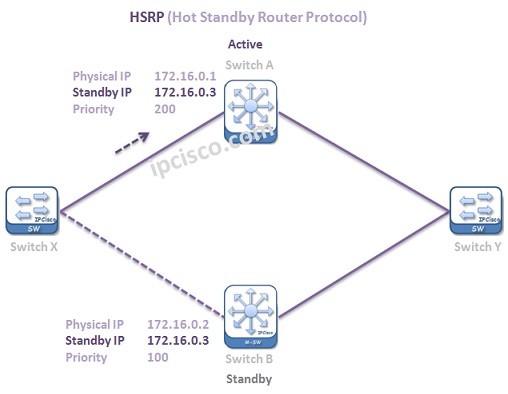 HSRP(Hot Standby Router Protocol) is a Cisco proprietary First Hop Redundancy Protocol (FHRP). HSRP first hop redundancy mechanism provides alternative path as a proactive action for any failure on a device. In this lesson, we will learn the protocol and in the following lessons, we will also learn HSRP Configuration. You can also view related RFC 2281. 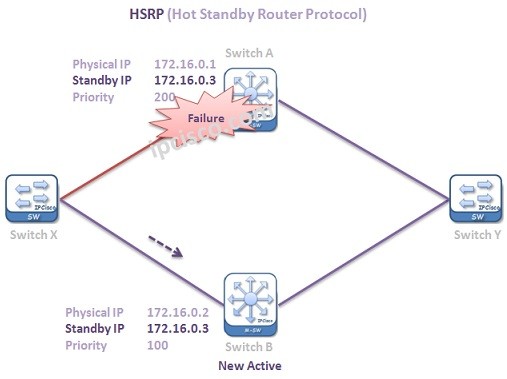 By the way, HSRP Group numbers is mention at the beginning of the confiugration after “standby” keyword. There can be multiple groups of Hot Standby Router Protocol on an interface.

The Standby Router is the backup of Active Router. When the active router fails then this router becomes Active and the traffic goes through this router.

Lastly the Listening Routers are the other routers that are participating in the HSRP group.

Priority values can be manually set to any value between 0 and 255. The default HSRP Priority is 100.

After the configuration of Hot Standby Router Protocol, some states are passed one by one. After these steps, Active and Standby routers are elected and the HSRP become active. So, what are these states?

These HSRP states are mentioned below respectively:

Only in three states, hellos are sent. Speak, Standby and Active states. As you know standby and active routers already send hellos each other. In the last one, in speak state, hellos are sent to determine the active and standby routers.

There are two HSRP versions. These Hot Standby Router Protocol versions are: