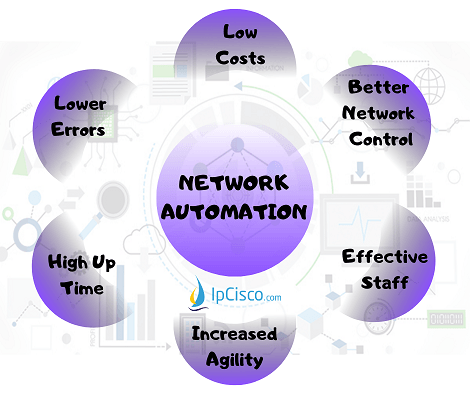 With Network Automation, your network cost will decrease. Because you can do many network activity automatically and fastly. This will reduce the job complexity and so it will need few person hours. Instead of many network engineers, few network engineers can be overcome all the network related issues on troubleshooting, upgrading, configuring etc.

Up to know, %95 of network activities has done manually by human. So, this can cause many errors and this reduces performance. Network Automation remove human errors by automating the operations. So, any human related errors or any actions that was missed because of an engineer will be eliminated anymore. With automation, acting on the network will be faster and without human faults.

Network up time is the first important parameter for a network. With manual activities, network up time can be decrease because of the unexpected errors of engineers. But with automation, network will work without human error and this will increase network up time.

With network automation, repetitive roles will be done my automation programs and network engineer roles can route to another areas to improve network and business performance. So, network staff can be used effectively.

By using automation programs, you will have a perfect network view. You can access network data, performance reports easily and this will improve your control on your network.

With the vision of Network Automation, you can develop new products and services. This can improve your business agility and market share.