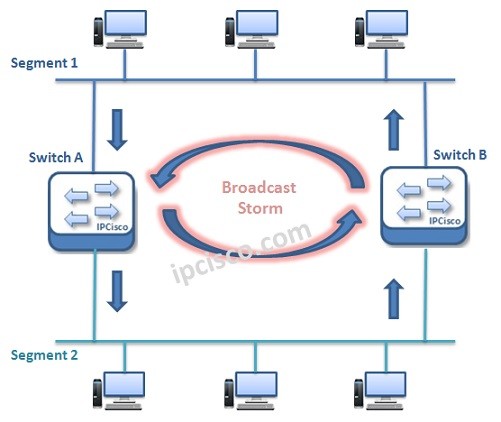 During the development period, various versions of STP has been introduced. Different standards has been created beside Cisco specific versions. These STP versions are :

Let’s talk about each of these Layer 2 Redundacy problems.

Think about the below topology:

Here, when Switch A receives a frame from Segment 1 and send it to the Segment 2, Switch B also can learn it from Segment 2. And it also sends this frame to Segment 1 as if it is being done first time. So, frames are doubled and a Layer 2 Loop Occured. And this Layer 2 loop causes a Broadcast Storm. An infinite frame send/receive process occurs.

One loop in a Layer 2 domain can cause one more Alyer 2 loops even if the siwtched network is a large network.

This Loops also cause a MAC Instability issue. As you remember, source address of a frame is important for MAC address types. These tables are created with source ports and MAC addresses. During a Loop, a frame can be received from different sources. So MAC Instability problem occurs. Here, a MAC table can have multiple MAC addresses for the same ports. This is an undefinable case for switches. 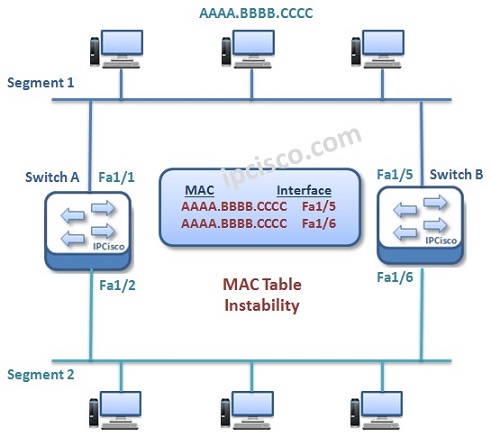 Multiple Frame Transmission is the problem of multiple, unnecessariliy transfer of Layer 2 frames. Because of there are multiple paths to a destination, same frame can be sent through different ways and this causes multiple frame transmission. 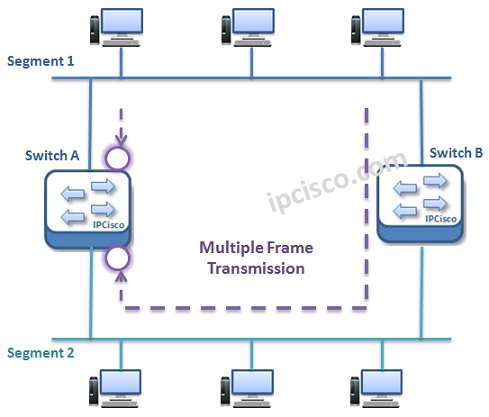 Spanning Tree Protocol (STP) has a mechanims to avoid Layer 2 Loops. With its mechanism, it checked all the available links. It determiens primary and backups of redundant links. According to some algorithms, some of the links pruned and only one available link become active at the same time to a destination. We can say that Spanning Tree Protocol (STP) mechanims basically prunes the unnecessary links at that time. If this link become offline because of a problem, then STP make another link as active. And the communication continue with another available way. At a time, only one link is active with STP.

BPDU is the abbreviation of Bridge Protocol Data Unit. BPDU is the messages used between switches. BPDUs are sent and received from the ports. But blocking ports are only receive them to determine any failure etc. They do not sent BPDUs.