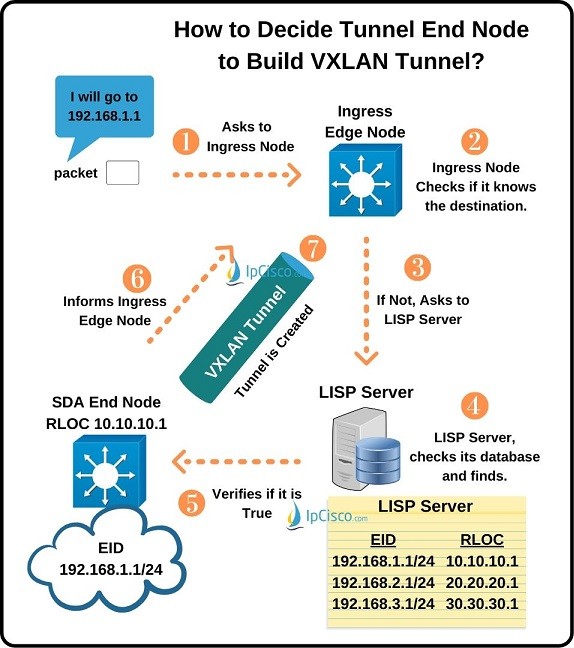 Software-Defined Access (SDA) is a new Local Area Network Architecture that uses Software Defined Networking with physical network devices. It is the last technology for Enterprises, that provide an efficient network built, management, operationand more. In Cisco SD Access Architecture, there is a central Cisco DNA Center (Digital Network Architecture Center)  as a contoller and users that manages network over a software GUI, provide network automation with APIs. SD- Access is  an important product of Cisco DNA Architecture.

Users can access to the Controller in two ways in Cisco SD Access: With GUI and with APIs. 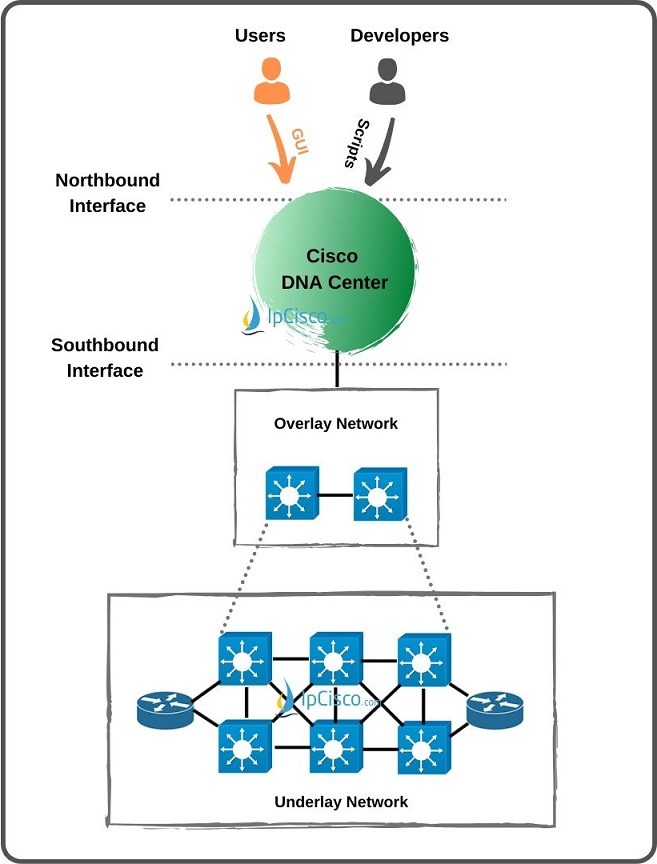 In Software-Defined Access (SDA), Cisco SD Access, Conroller has two sides as all SDN Architectures. These are:

Southbound Interface has three sub parts. These are:

Underlay is the physical part of the SDA Southbount part. Pyhsical network devices like cables, switches,routers etc. resides in this part.

Overlay is the part with which VXLAN Tunnels are created between SDA switches to provide data transfer between different fabrics.

Fabric is the combination of both physical underlay and the logical view overlay. In other words it is the complete solution of virtual overlay network over physical traditional network. 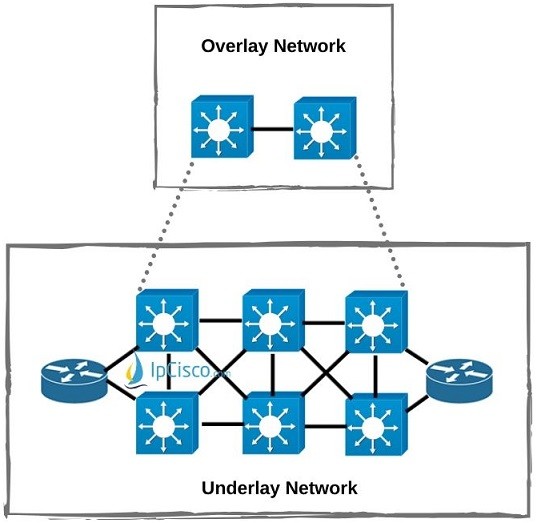 Now, let’s learn each of these part detailly.

SDA Underlay is the physical part of the Cisco SD Access southbound part. Here, there are physical switches, routers, cables etc like traditional networks. It is also a traditional network. The main aim of this connectivity is to support VXLAN tunnels that will be used on SDA Overlay.

There are different nodes used in SDA Underlay according to their roles. These nodes are:

Fabric edge nodes are similar to the Access switches. They are close to the user and connected to the endpoint device.

Fabric border nodes are the border node that connects devices that resides in outside the SDA.

To support Cisco SD Access, these devices can be purchased for you company or you can use your existing devices according to their support. The advantage of getting new devices is, DNA Center’s auto recognize and making the configuration automatically.

Basically, instead of switching, we are using routing in Routed Access. And with DNA Center, this can be confiugred automatically fot SDA Underlay.

SDA Overlay is the logical part of the Cisco SD Access southbound part. Here, the VXLANs Tunnels are used to transfer data between fabrics.

Overlay is the part with which VXLAN Tunnels are created between SDA switches to provide data transfer between different fabrics. Here at the first Fabric edge node, the frame is encapsulated with VXLAN and send to the network. The nodes SDA network send the data without doing anyting, with VXLAN tunnel. At the other end VXLAN encapsulation is removed and the data reached the other end.

VXLAN is the abbreviation of “Virtual Extensible LAN”. This technology is used to transfer data between SDA End Points as Tunnelled.  VXLAN is a good performing technology, because it is using ASICs. 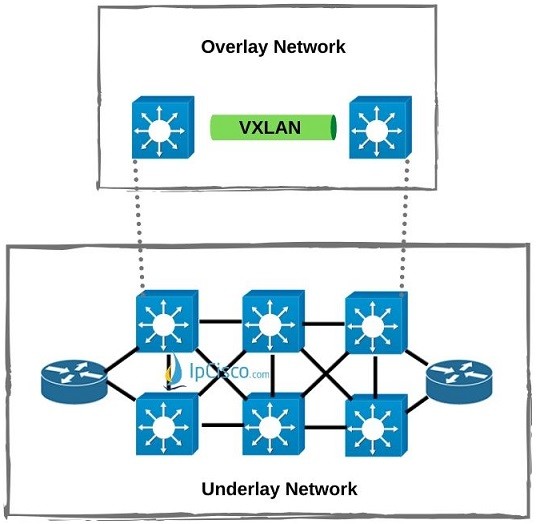 Basically when the end points send data to the SDA Fabric Edge Node, it encapsulate the data with VXLAN. The data travels in this VXLAN Tunnel and at the other end VXLAN part is removed.

LISP (Locator ID Separator Protocol) is a network protocol that allows using two addresses instead of single IP address. These addresses are

Endpoint Identifier (EID) is the address that is assigned to end hosts.

Routing Locator (RLOC) is the address that is assigned to primary routers.

In Control Plane of Cisco SD Access, we will use both of these addresses. Let’s see how.