We have talked about the Network Devices before. Now, let’s go deeply with some of the important ones. Hubs, Switches and Routers. Here, we will focus on Ethernet Hub vs Switch vs Router. We will learn the main similarities and the differences of these three basic Network Equipment. Let’s start.

Ethernet Hubs are the network devices that works at Layer 1. They are not smart devices. They do not make any decisions on traffic. Hubs only provide extra ports and they expand the network with these ports.

There are two type Hub:

Hubs divides the network bandwith according to the hub ports. They are half duplex devices. Whole Hub is one collision domain. So at the same time only one port can communicate. If other one tries to communicate, then collision occurs. 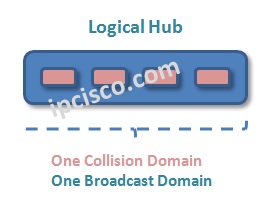 The whole the Hub is one broadcast domain. So when a packet is sent to one node to another, all the nodes receive that traffic.

In large networks, hubs are not used. The area of Hubs are small networks. They are the basic network building equipment. So, they are cheap devices.

Switches are the smart network devices that works at Layer 2 generally. But there are also Multi Layer Switches that work on multiple layers, Layer 2, Layer 3 and Layer 4. Basically, they have many ports on them to expand the network and they can be used for network expansion.

Switch is a Full Duplex device. Each of the ports of the switch is one collision domain. So, all port are communicate independantly.