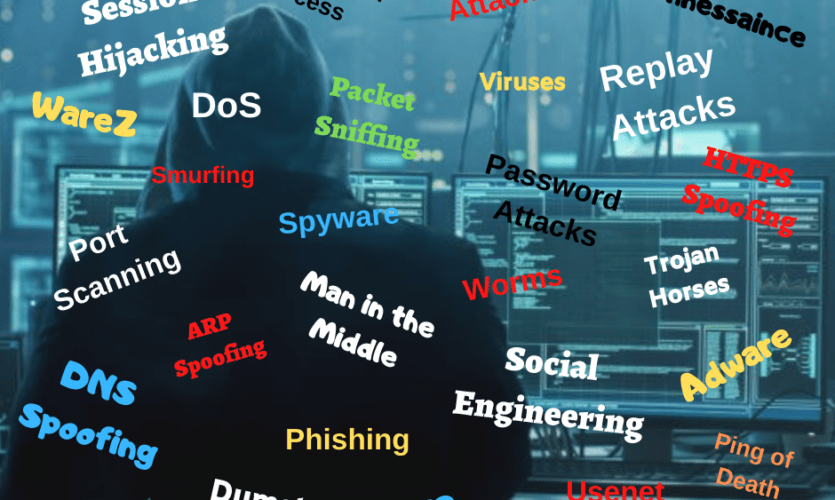 There are various Network Attacks and various ways to prevent yourself from the attackers. In this lesson we will focus what are these Network Attacks, Cyber Attacks.

So, what are the types of Network Attacks (Cyber Attacks)?

Denial of Service (DoS) Attack is a cyber attack type that aims to maket he victim system unusable. There are different types of DoS Attacks according to their type:

Vulnerability DoS Attacks are done to crash the system by determining and focusing its vulnerable parts.

The aim  of Bandwidth Flooding DoS Attacks are to clog the victim system with too much requests, traffic etc. 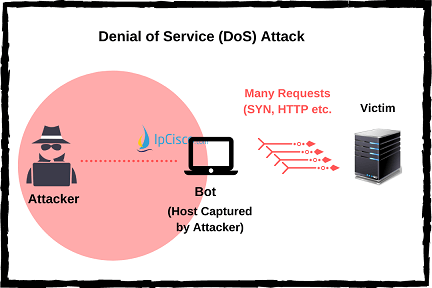 Lastly Connection Flooding DoS Attacks are done with too much half or full open connections. After a while system can not reply to these requests.

There is also an enhanced version of DoS Attacks. These are DDoS (Distributed DoS) Attacks. With DDOS Attacks,  attacker attacks from many devices o the victim device. So, it is difficult to detect the source of this attacks.

By the way let’s also define an important term, Botnet. Botnet is a private computer that has infected form any malicious software and because of this, it is controlled without the victim’s knowledge to do malicious attacks to others. DDoS (Distributed DoS) Attacks are done over such systems. 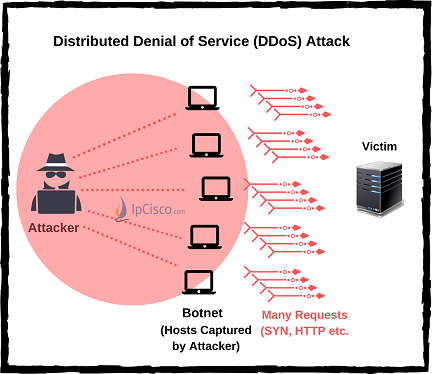 There are different namings for specific types of DoS Attacks. These are:

TCP SYN Flood Attack is the attack with which attacker sends too much connection request to the target and if it gets reply, attacker never replies back. Waiting for timeout and too much requests fills the victim system queues. 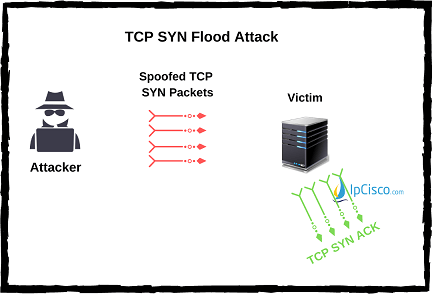 Ping of Death is the attack type that  sends ping packet to the victim over maximum 65535 value. And before sending this, attacker fragments the packet because this size is not allowed. At the other end, the victim, reassembeles this packet and its buffer crashes. 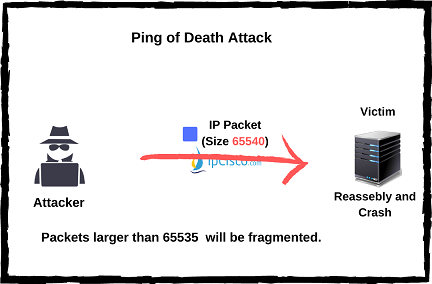 To protect your system from Ping of Death, you can use a firewall and on firewall you can check fragmented packets, if their size is normal or not.

Teardrop Attack is the attack that is done via packet length and fragmentation offset parts. Attacker sends fragmented packets like ping of death. The target, can not reassible this packet because of a bug about TCP/IP fragmentation. The packets overlap and the system crashes.

Smurfing is the attacks type that is done via too much ICMP Echo (Ping) and aims to exhaust system resources. With Smurfing, attackers behaves like a victim’S trusted IP address and sends many ICMP Echo messages to a broadcast address. All the devices in this broadcast domain sends ICMP Reply to this ECMP Echos. So, in a short time the system traffic increase and resoruces exhaust. 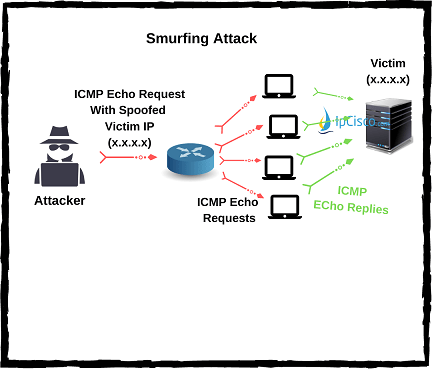 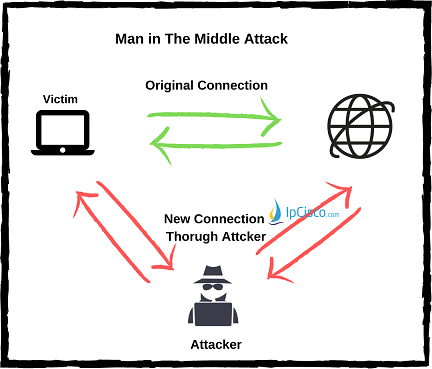 In normal communcation, client connect to the server and the data traffic occurs. But with Man-in-the-Middle Attack, the attacker enters between the Client and the Server. The attacker achieves this with various techniques and because of that victim is unaware of what is going on. He/She thinks that, the connection is still towards the destination. But after a successfull Man-in-the-Middle Attack, the data traffic comes to the attacker’s device not the exact destination.

The are also some different namings for specific MiTM Attacks. These are:

Session Hijacking is an old cyber attack type with which the attacker receives the traffic between two victioms by  capturing the session between them. In this type of attacks, receiver and sender things that they are communication directly with the other end. But, in real, their traffic goes to the attacker. 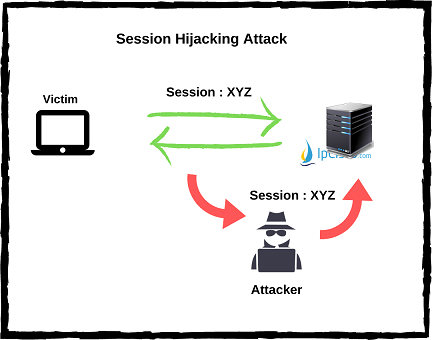 Replay Cyber Attacks are the attacks with which the attacker eavesdrops the traffic between two points, intercepts the traffic and sends requests as he/she is a legitimate user. By doing this, attacker receies the requested data from the destination. Source of the request and the answered destination do not aware of this process. The attacker receives all the information requested.

For example if you request a payment with your credentials and if your data is intercepted by the hacker with a replay attack, then, attacker can imitate your request and send it to the destination as he/she is the legitimate user. At the destination, your reuest will processed and your requested money will sent to the attackers account. 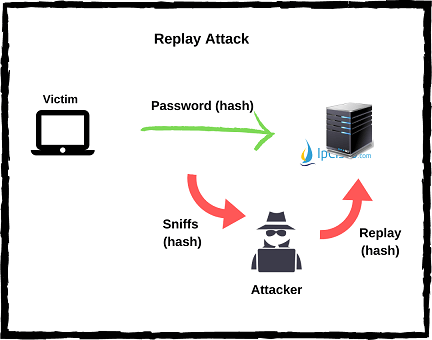 IP Spoofing is the process of tricking a victim via trusted IP packets.  Here, the attacker sends a modified  IP packet that has a trusted IP Source address to the victim host. The host accepts this packet because of the fact that it assumes that it is coming from a secure end. After that, the traffic  from the victim goes to the attacker instead of the real trusted destination. 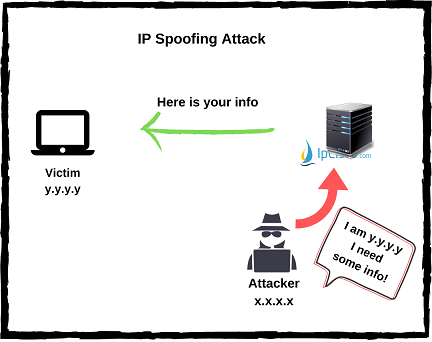 To protect your company network from IP Spoofing,  you can use Access-lists. With Access-lists, you can limited incoming traffic from the outside. But what if this attack is done from inside? So, Access-lists can not be a certain solution for IP Spoofing.

As you know ARP is the protocol tat links IP addresses to MAC addresses. With ARP processes in OSI layer 2, devices in the network learnes their MAC addresses each other and create ARP tables that includes IP-ARP machings.  After this learning process, communication is done through this ARP table instead of asking “What is x.x.x.x IP’s MAC?” question every time. 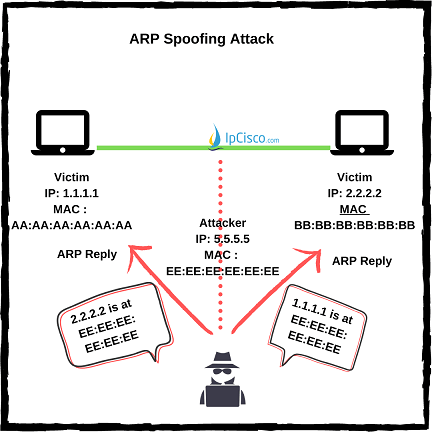 In ARP spoofing, attacker link its own MAC address with a trusted IP address in that network. By doing this, attacker manuplates the ARP table. When the victim host want to send a packet to that IP address  according to records of ARP table, it sends the traffic to the attacker. From the victim’s point of view, everything seems normal. ARP table seems secure and it sends the packet according to the ARP table. It do not know that, IP-MAC linking in the ARP table, will send its traffic to the attacker’s malicious device.