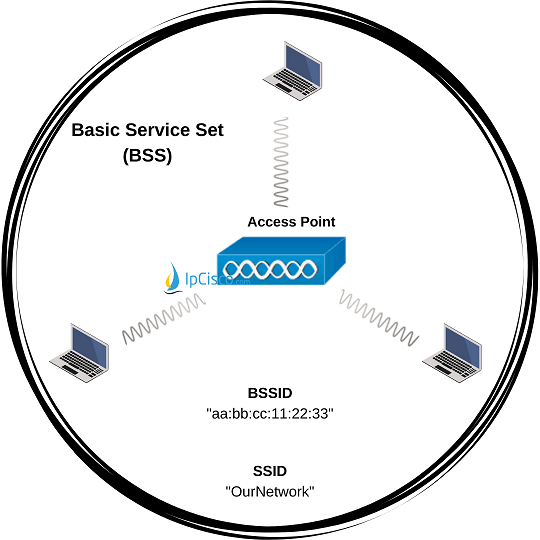 In this wireless principles lesson, we will cover antenna types used in wireless LANS and we will learn wireless topology types like BSS, ESS, IBSS.

Radio Frequency (RF) Spectrums and the Satellite Orbits of wireless communication are managed by International Telecommunication Union-Radio Communication Sector (ITU-R) all over the World.

Beside Telecommunication Union-Radio Communication Sector (ITU-R) that manages RF spectrums and satellite orbits, wireless networking standards are managed by two organization all over the World. These are IEEE and Wi-Fi Alliance. IEEE defined the technical standards of 802.11. So, network vendors produce their products according to these standards. The Wi-Fi Aliance is the non profit organization that certifies the wireless products of the vendors as they are compatible with the 802.11 standard. 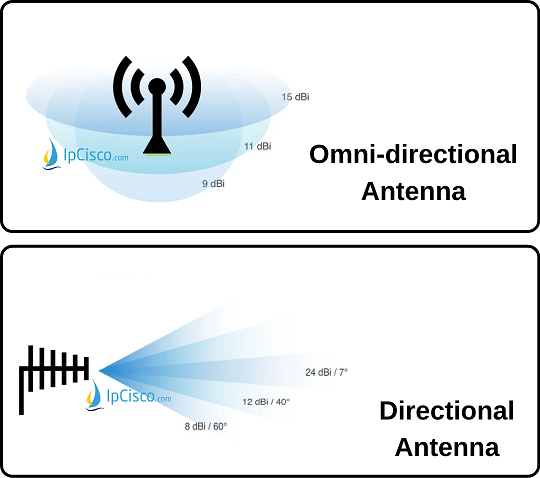 The first wireless topology of wireless principles is Basic Service Set (BSS). Basic Service Set (BSS) is a closed group of devices consist of a central wireless source and its clients that get service from this central source, that can communciate with 802.11 wireless standard. The central device can be an Access Point (AP) and the clients are the devices that are wireless capable. In other words, we can say that, BSS is a group of wireless devices served by a a single Access Point (AP). All the devices in a BSS, use the same channel to communicate.

Every BSS has a string logical name that is advertsed by Access Point. This identifier is called Service Set Identifier (SSID). In other words, SSID is the network name of BSS. It is not necessary for an SSID to be unique. But, there is another identifier that is used by devices and must be unique like and it identifies Access Point uniquely. It is the MAC address of Access Point and specifically called BSSID (ID of BSS).

Access Points use Omnidirectional Antennas. So, their signals are usable in a circle or donut like area. So, the physical borders of this area is has a specific name in wireless standard. This is Basic Service Area (BSA).

As we have talked about before, in a BSS, there is an Access Point and connected clients to this Access Point. Here, a client must be accepted by the Access point to get service from it. Firstly client sends an association request to the AP and then AP replies that it accepts this request. By doing this, association is established. If AP do not accept, then the device can not be a client of this BSS.

Communication between the devices in BSS can be done over Access Point. All the traffic pass through AP and this provide a security mechanims by managing the traffic on a central node. But, the signals are over the air, so without an encryption it is not secure. So, various wireless encryption methods are used. 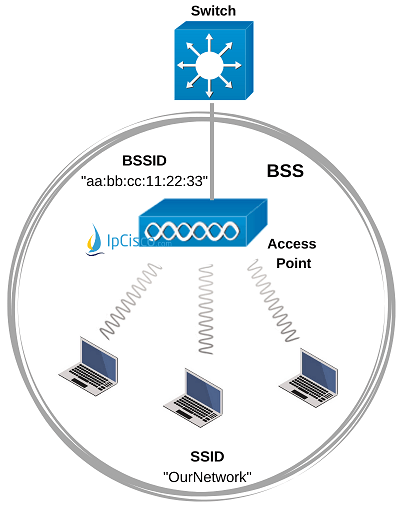 Normally without VLAN configuration, one SSID is used by a single VLAN. But we can extend this for multiple VLANs with multiple SSIDs. Here, VLANs and SSIDs are different but the coverage area of the BSS is sam efor each network. Because the physical device, Access Point is the same device. Fort his type of network, different BSSIDs are used and in Cisco, this BSSIDs are  determined by incrementing the last digit of the radios’s MAC address. 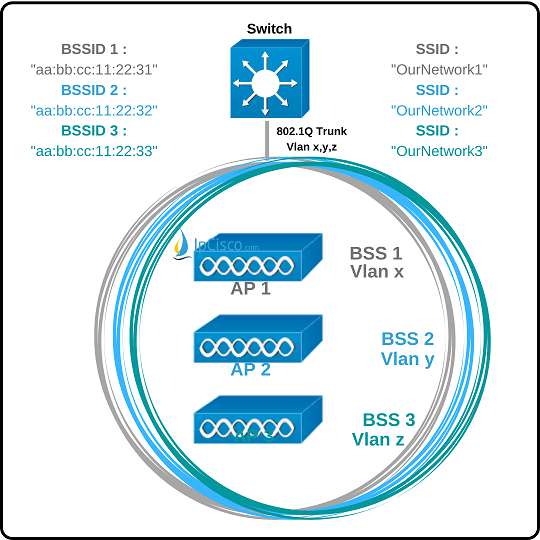 Passing from one AP to another is called roaming. This is simply, similar logic with Mobile Operator roaming. If a client change BSA, then check for a new AP and if finds then connected to this new AP. 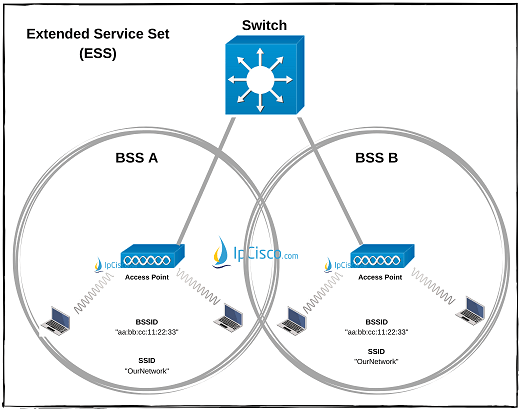 In 802.11 Standard, clients can directly communicate together without any need to an Access Point. This type of wireless communciation is callled Independent Basic service Set (IBSS). Another name of this is ad hoc network. Such wierless connection is used generally whenever two laptop want to share information, a PC want top rint someting from a printer etc.

For Independent Basic Service Set operation, one device works as leader. The other become client. So, the leader device advertise the network and the other want to joinm this network. 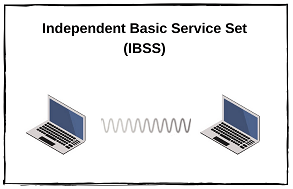 In this lesson we have covered wireless principles. We have learned wireless topology types like BSS, ESS, IBSS, beside antanna types used in wireless.