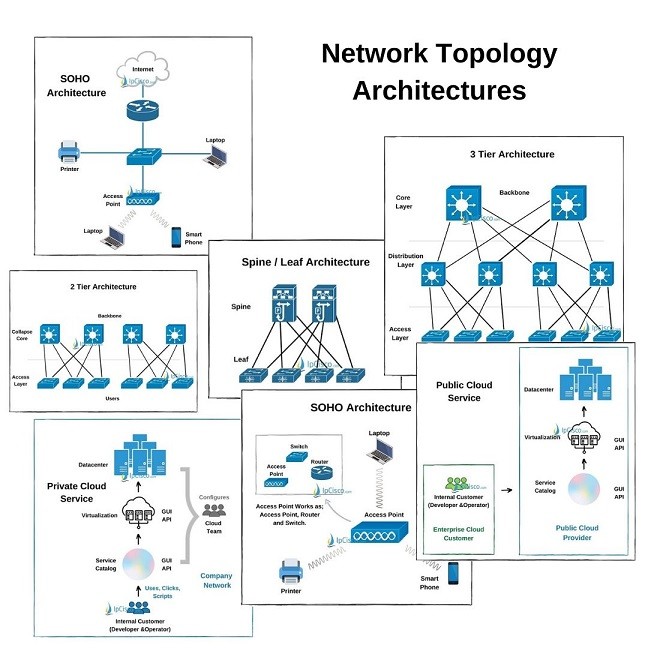 You can find some of these Network Topology Architectures bellow:

There are also WAN topologies. We will explain WAN topologies in a special WAN lesson. Now, let’s start and learn what are these topology architectures.

The logical view of a typical 3 Tier Architecture is showed below. 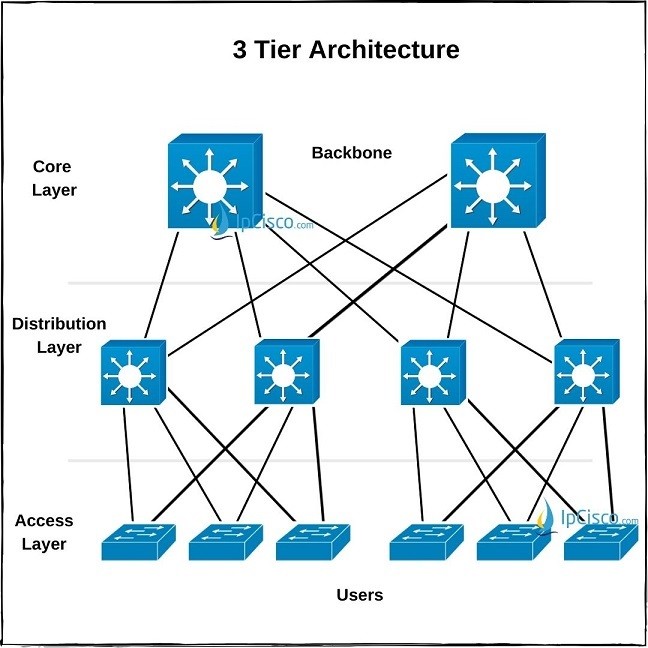 Each of these layers has a special duty in 3 Tier Architecture (Three-layered Hşerarchical Model). Now, let’s talk about each layer’s role one by one.

Access Layer is the lower layer of 3 Tier Architecture. It is the closes layer to the end users. In this Access Layer, Access Switches resides and uysers are connected to these switches.

In Access Layer, Network Access Policies, Layer 2 Security Mechanisms like Port Security are used. Beside, Layer 2 Loop preventation mechanims like STP, RSTP, PVST, MST are used in this layer. Another imporant and most used technolog in this layer is VLANs. With VLANs, different parts of the company is divided.

Routing protocols are used in this layer and the main duty of this layer is provifing routing between them and the distribution layer. Redundanct is also important fort his layer. So, redundant core devices are used to overcome single point of failure.

There are two layers in this architecture. These are : 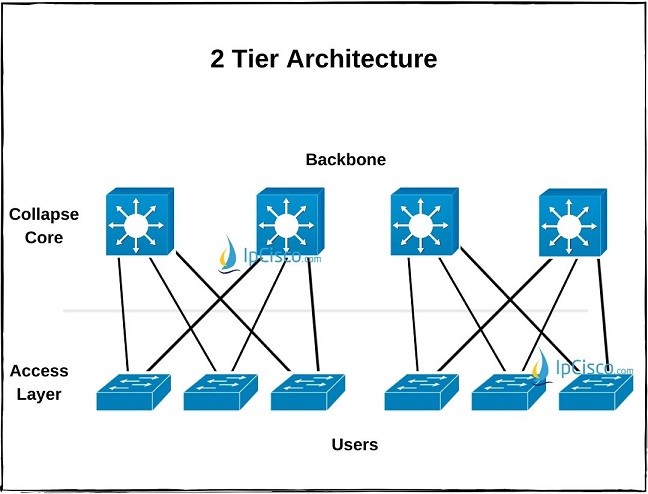 If enterprise wants to migrate to a 3 Tier Architecture, it is possibler to do that with additional Core Devices.

With the new requirements to become more scalable, fast and efficient, a new datacenter design is developed. This design is replaced with three tier design that is used mostly in networking World. This technology that is also a good solution for evolving datacenters is called Spine Leaf Architecture.

Spine Leaf Architecture is the network architecture with which all the devices are the same segments away. It is the two layered architecture conssit of Spine Layer and Leaf Layer. 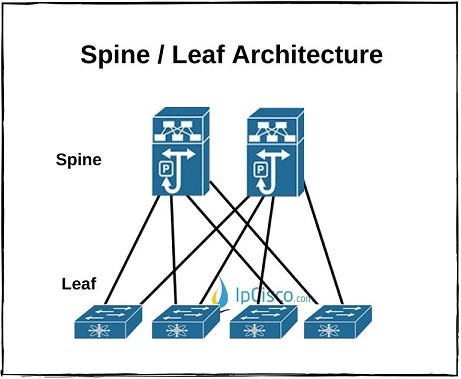 SOHO is the abbreviation of Small Office / Home Office Architectures. This architecture is the simplest network architectures that is mainly used in homes or in small enterprises as its names implies.

In SOHO architecture, there is a small switch, a router and connected access devices  like PCs, printers etc.  basically. The router that has routing capability provides Internet Access.  The switch provides the ports to provide network access tto the end users. PCs, printers etc are the devices that is used by users. Generally one device that has both switch and router capability is used instead of two separate devices.

Ethernet technology is used to connect the devices in SOHO Architecture. Access devices are connected to the swithc or switch/router adn then they can Access Internet. Various Ethernet cables can be used to connect these devices to the network like CAT5, CAT6 cable standards. 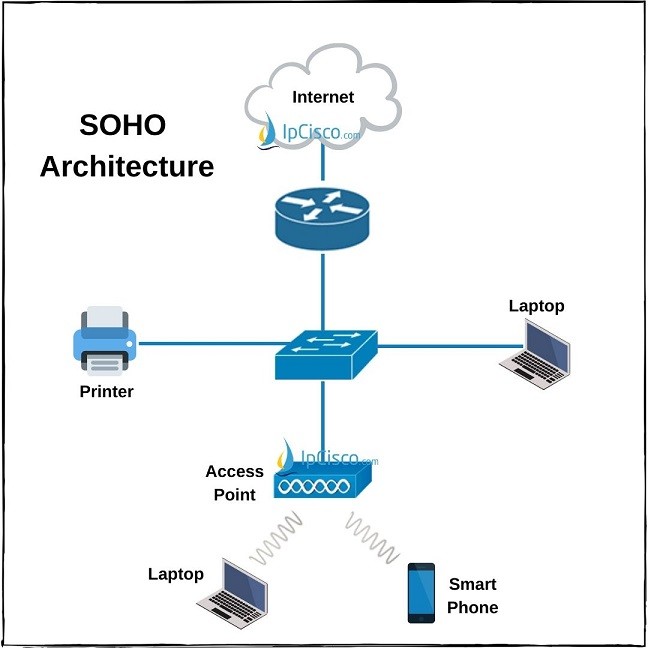 Beside, with the wireless networking new devices has alsom added to SOHO networks like Access Points, Access Points are the devices that provide Internet Access to the access devices. To do this, they also connected to the network via Ethernet cables. These Access points can be separate devices in the network. But in today’s networks, a single device is used as switch, router and access point. One device provides all these capabilities and Access devices are connected to this device to have Internet Acccess. 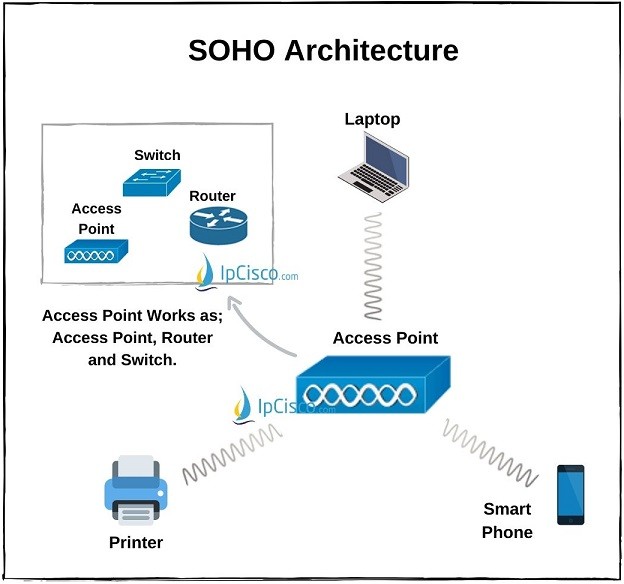 Private Cloud service or as the old name, on-premises is the cloud service that is given to own company. This service is used by the users in the same company. Employees in the company an request virtual machines for their works, developments etc. And the requested virtual devices are provided these users by cloud architecture of the company.

So how does private cloud architecture works? Here, users request cloud services form the Cloud Service Catalog that is configured bu Cloud Teams before. The virtualisation softwares that are also configure by cloud teams, create virtual devices in datacenters and users can use these virtual devices for their works,d evelopments etc. 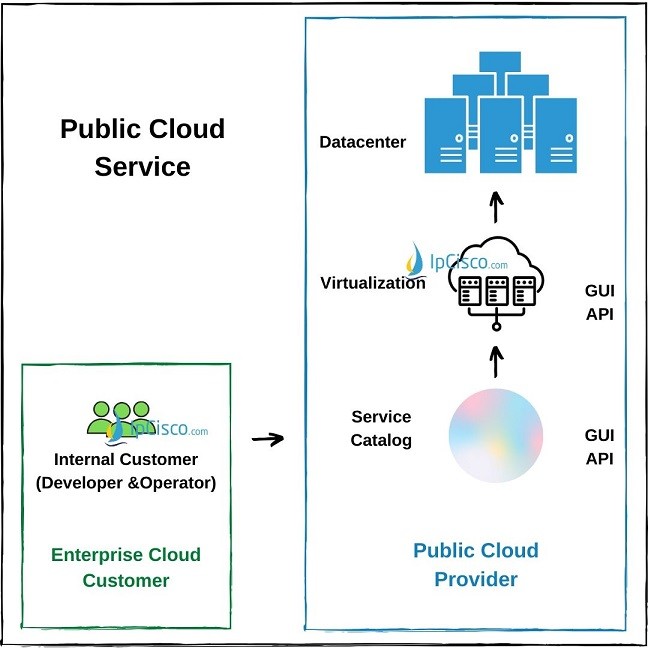