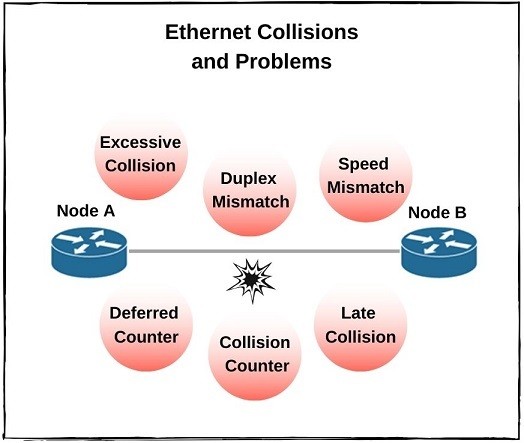 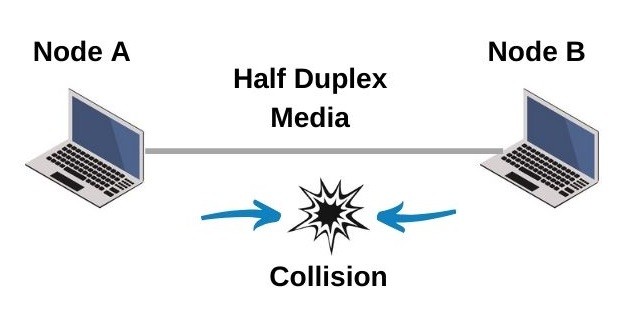 The collision mechanism is used with another mechanism that is used to avoid collisions on the media. This mechanism is called CSMA/CD (Carrier Sense Multiple Access/Collision Detect).

CSMA/CD mechanims works with a simple way. According to these mechanism, each end check the availablity of the medium and then send the data. If they find the media busy, they wait until a rantom time and try again. Let’s explain this detailly.

When Node A decided to send a frame, it checks the medium. If the medium is not available, it waits, or if the medium is available, then it sends the frame. If A and B thinks that the medum is available at the same time, then they both send the frame, and the collision is detected. They both waits for a random time to try again. The time after the collision is divided into time slots, they both get a random slot. If the same situation occurs one more time, they extend the number of the slots.

There are some counters related to Collisions and CSMA/CD mechanism. These are:

Beside these collisions there are also two important Ethernet Problems. These are:

Now, let’s talk about each of these collision counters one by one.

Deferred Counter is the number of interface tries to send the frame. As we have talked about above, after an attemp if it find the media busy, deferred counter increases. This is a normal Ethernet operation.

You can see deferred counter with “show interface interface” command on Cisco devices during your operation.

Collision Counter is the number of collisions in the media. There are two different collision types and you can see this types with “show controller interface” command on Cisco devices. These collision types are:

Multiple collision means that, after a couple of collisions the frame has sent.

To check ccollisions ona  media, you can use “show interface interface” command on Cisco devices during your operation.

Collisions are detected in a certain time. This time changes according to the media. If a collision ism detected after this certain time, it is called Late Collision. This time is generally 512 bit times.

To check Late Colllision number, you can use “show interface interface” command also.

There are various causes of Late Collisions. Some of them are :

To Test Yourself With Various Network Lessons, You can view All Quizes Page.

If the interface receives 16 consecutive collisions during frame transmission, then it gives up and the frame is dropped. This collision type is called Excessive Collision.

You can check the Excessive Collisions with “show controller interface” command on Cisco devices.

Here, there a re two parameters that is used with excesssive collisions. These are, TRC(Transmit Retry Count) and TDR(Time Delay Reflectometer). TRC is the number of the transmit retries of the associated packet. TDR is the count of the time from the start of a transmission to the collision time.